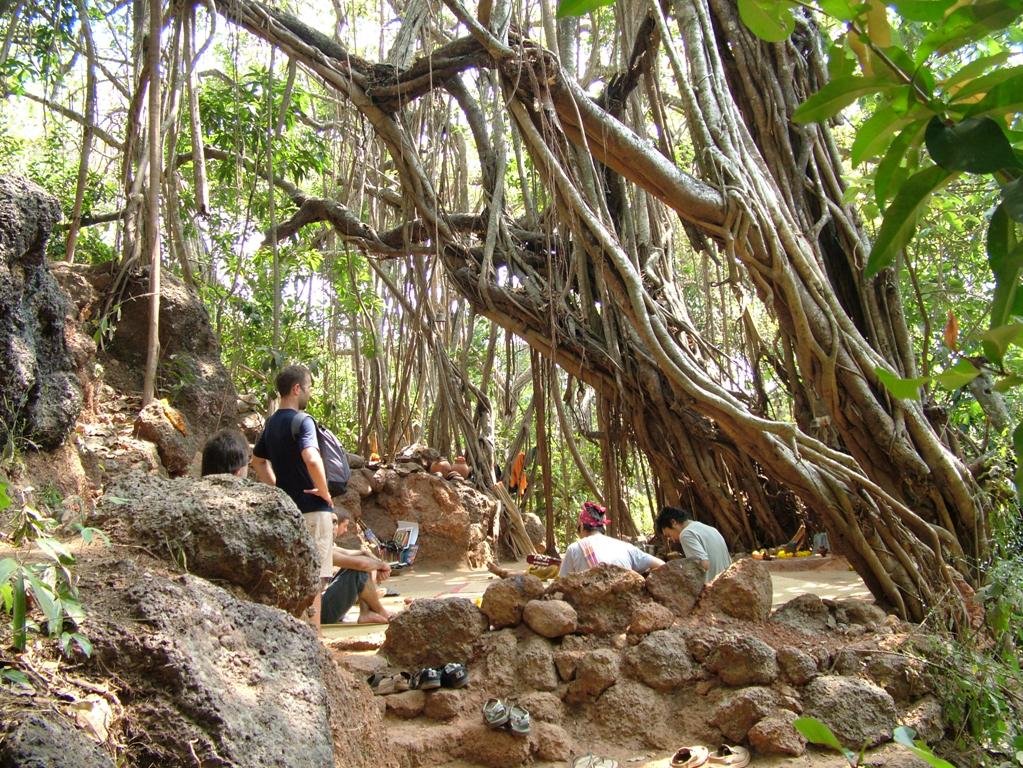 We first heard of a guru in the jungle while lying on Arambol Beach. Supposedly, in the nearby jungle there was a banyan tree. Below the tree lived a hermit who had said goodbye to the modern world many years ago. I was skeptical of the whole story, told by a guy with a never-ending beard. And we didn’t came to India to seek wisdom; we came to have fun. But still, my friend Marko and I decided to check it out the next day.

As tree roots started replacing the beach sand, we put our shoes on. “Jungle” was not as impenetrable as the local name would suggest to European laymen like us: the trail was visible and easily walkable. And full of people.

“Just walk 20 minutes straight,” said the couple we asked about the banyan tree.

The man we asked 15 minutes later was more specific.

“When you hit a small stream, just cross it. Uphill you will see a large tree. You can’t miss it.”

He was right, Broadway Street was easier to get lost on.

We crossed the stream and arrived at a tree where four white people were sitting in a circle on a large padded area in the shade. We asked to join them, and they quietly agreed. Everybody was sitting in the lotus position, so I copied them. One had a guitar. Slowly, we started talking and connecting bits of the story. The tall, super-skinny guy was the man who permanently lived under the tree. He was Dutch, and he arrived seven years ago. He had a very primitive shelter in the back. There was a small fireplace. Metal mugs and pans were hanging from the tree, together with sacks of rice and bananas. But it was not only dietary products. One guy slowly rolled a joint. It started going around the circle; we didn’t mind when it came to us. It was strong, as you would expect from weed grown in an Indian rainforest. One by one, depending on personal tolerance, we abandoned the lotus position and lay down on the padded earth. I watched the sky swinging between the branches. It was great.

The Dutch guy seemed the least affected. He kept messing with his bags. But he was far from normal. As new people approached the stream, he stood up.

“Jump over the water. Don’t put your dirty feet in!” he shouted. “I drink the water from that stream, goddammit!”

Newcomers didn’t reply, although their eyes showed surprise. Could you contaminate a running stream just by walking through? If you want your water sterile, why do you live in the jungle?

Awkwardness continued as everyone sat down. During conversation, the Dutch guy raised his voice a few times to impose authority. He repeated that we needed to respect his place, not abuse his generosity. He seemed aggressive.

I nodded to my friend, and he nodded back:  it was time to leave. We said goodbye and started walking back.

“What an enlightened prick!” I commented.

“Yes,” my friend agreed. “I guess that’s what happens when you live in a jungle for seven years.”

But we were in for an even bigger surprise.

“You know that’s not the real guy?” said a woman we met on our way back. Her friend nodded.

“What do you mean?” We were surprised.

“That guy is a fake. The real Indian guy is under another tree.”

She showed us the path to the other tree; it was 10 minutes’ walking.

Tree number two looked less impressive. It was smaller and located downhill, and with a smaller padded area. But the baba sitting there was the real deal: dark Indian with an even darker turban, snow-white beard, and bare chest. We already knew the procedure. We quietly greeted him, he nodded in approval and a gestured to a place where we could sit down. Another tourist was explaining to baba that he was famous—a passage in a guidebook mentioned him as the local attraction. Baba gently smiled. We asked many questions, but he was not surprised; he was greeting many people every day. The tree was full of inscriptions from passing tourists.

He started living in the jungle 27 years ago, alone, under the large banyan tree that we visited. Seven years ago, a Dutch guy came and asked if he could join him. Although he was strange and sometimes abrupt, it worked for a few years. But two years ago the situation escalated, and one night, in a moment of insanity, the Dutch guy tried to kill him. Baba was unharmed but worried. What could he do? He didn’t want to call the police or use any kind of forceful action; that was against his beliefs. He decided that, after many years, it was time to find another tree. A week later, he found this tree—less prominent but still nice. That is where he had lived for two years, greeting visitors and leading a peaceful life. Indeed, his smile was contagious. We were impressed: he was glowing with positivity. How could the Dutch guy be mean to him?

At one point, my friend asked if he could take a photo. Baba said no, we could get unlimited words of wisdom but not one tourist photo. My friend took the camera down. But I knew what he would do. While the camera was in his lap, he discreetly pressed the trigger while Baba was looking away.

I know what you’re thinking. We broke the promise given to the old, welcoming man. Bloody tourists. But there is a workaround. On a philosophical level, baba was not against photo-taking per se. After all, photons reflecting off his body and entering the lens of the camera didn’t do him any harm. He was against other people looking at his photo, as a matter of privacy. We can solve that. As a moral person, you are going to respect baba‘s wish. And you are not going to visit this link with a photo of baba sitting under a tree. No eyes looking, no problem.

We left baba with heads full of questions. What was true and what was a lie? Is the whole story about 27 years in a jungle a way to get sympathy from tourists? Maybe he sleeps in a proper hut and just comes to the tree in the early morning? Regardless of that, we learned one important thing—how to become a guru in a jungle:

But it’s not so easy to become successful.

If you give nonsensical advice or make your visitors uncomfortable, the word is going to be that you are just a crazy man. Some may still visit you, but they will not feel obliged to bring you presents. You will be labeled as a fake guru. Tired and hungry, one day you will pack all your earthly possessions in a small sack and return to your village.

We experienced two different examples. I could imagine myself bringing a bag of rice back to baba in the jungle; he was interesting and positive. The Dutch guy was not, the only reason to go back to that place would be to smoke pot.

It seems the history of organized beliefs was often like that. The Bible warns about false prophets in 70 different places. But I never learned about minor, fake ones. How many other prophets were there for every Jesus, Buddha, or Muhammad? Buy a ticket to India and experience firsthand how it worked for millennia.

Or be even bolder: become a prophet. My friend and I joked while leaving the forest; we just needed a nice tree, long beards, and we could offer a third option to visitors of the Arambol jungle. It would be an interesting endeavor, cheaper and simpler than the Kumaré experiment.

My beard is currently only three centimeters long. But one day, one fine day…