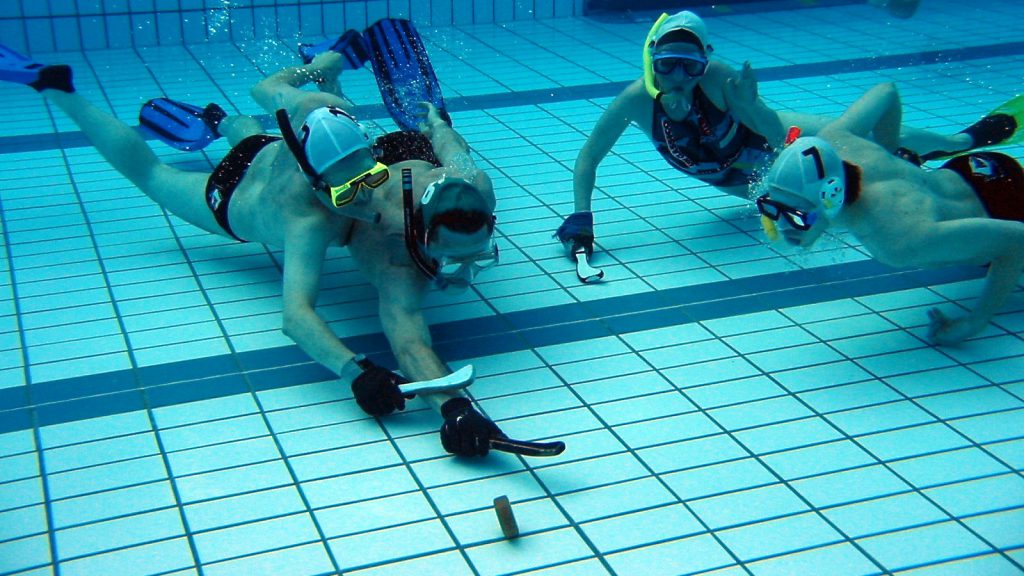 I was 12 and I got my first mask and fins. I loved it. I would go every day to the seaside, to the rocky pier, and dive next to rusty, oily boats. I would take a deep breath and plunge to depths eager to see what is below. And there were so many things: broken plates, coca-cola cans, and even some fish. I got better and better until I could freedive 14 meters deep to the old car tire hosting a crab who was surprised by a pimply visitor.

“This must be how being a dolphin feels like!” I thought to myself. They are air-breathing mammals, same as me, going periodically to surface to take a breath. Then they would dive under and play catch with each other.

28 years later I was killing my time drinking beer in a smoky Berlin bar. “..underwater hockey,” mentioned a girl next to me. I turned my head and joined the enthusiastic conversation about the obscure underwater sport. “If you did free diving, you should totally do it, it is great!” Sumi said. Playing underwater like dolphins? I was in.

When I came for Wednesday training, the entire team assembled to help me. I got pink fins from one person, a white hockey stick from another, and mask from the third. Alex took it as his job to train me before the practice match. We did puck pushing, passing, and turning in a small kids pool. Easy-peasy-lemon-squeezy. I couldn’t wait to get into the big pool and score some goals. It was going to be great.

We entered the big pool and divided into two teams. I was assigned to be front right, as passing partner to Alex. “Start!”, someone shouted and we all swam towards the little green puck. As I dived in, Alex was already two meters in front of me. He didn’t have the puck for long, two people from another team attacked and engaged in something like underwater tennis. I got myself into action, meaning I got somebody’s fin in my butt, and somebody’s else knee in my face. I mean, I am not sure knee and fin were not from the same person, we were all a big ball of human flesh. In the excitement of that sexy moment, I forgot that air is a necessary requirements for a long life. My brain suddenly reminded me with a gentle thought “Air! Get some air or you will die!” and adrenaline overdose. I jumped out of the water like a mating salmon and started hyperventilating. A girl dived out next to me, took three breaths, gave me a look and dived down again. “Boy, these people are hard-core,” I said to myself and dived down. When I looked around, the puck was already on a different part of the pool. I mean, I am not sure if the puck was there, but there is where I saw an amorphous ball of hands, panties, and fins so I swam in that direction. As I approached, a battle of underwater tenis was abruptly interrupted by a white-pants enemy player who decided to play for himself and separated from the crowd. I swam to block his way, but it was like chasing a torpedo. He whizzed by me and put the puck in a metal goal.

Our brave team regrouped and started talking about strategy for the next round. My strategy was not to forget to breathe. At a start signal, we rushed again to the center, and this time I was watching for my chance from the surface. When crowd around the puck got smaller I dived in and actually got to touch the puck with my stick. My joy was not long-lived, as a member of the other team started fighting for it with me. In that tug-of-war, I was pushing as hard as I could, but the opponent had the same cunning plan. My brain screamed “Air!” and I went out. By the time my heart stopped pounding, the puck was again in our goal. Seems both my team’s strategy and my personal strategy to remember to breathe were falling. In addition, a team member told me that it is not allowed to push the stick with two hands. I guess the underwater police didn’t care because I lost the puck anyway.

In the third round, I didn’t get to any action, but at least I got some air.

Then, our team got a “penalty shot”. My team member would start in the back and I would be in the front. We assembled at the bottom of the pool and started. The puck was suddenly next to me, finally my chance! I took it, swam by the opposing player and went unstoppably towards their goal. Wow, can’t believe it, I am going to score. Then I noticed everybody stayed in the first half of the pool. I swam to the surface and Alex told me “You are not supposed to take the puck away when there is a penalty kick, we were just supposed to protect the sides pg the penalty kicker.” Andy Warhol once said, “In the future, everyone will be famous for 15 minutes.” It seems my future was not going to happen that day, and I will have to swallow much more chlorinated water before I become good with these underwater battles.

The game continued at the same pace for 20 more minutes. A lot of feeding frenzy scenes with human bodies all over each other like Berghain dark room at 4 am. Diving down, fighting for a puck, remembering to get air. Rinse, repeat. I got a better feeling for a strategy of the game, which is not surprising considering where I started. One time I even succeeded to intercept the torpedo with white pants, yay!

After half an hour the game ended. I thanked everybody for lending me their equipment and went for a long hot-shower meditation. My heart was still fast and chlorinated water was running from my nose. As I arrived home I dropped tiredly to my bed. With a smile on my face. Maybe my underwater play was more that of a sea cow than a dolphin, but still, it was a great, great experience that I want to repeat.