In this ever-changing world, one thing stays stubbornly the same: app store pricing.

The mother of all app stores, Apple App Store, came in July 2008 with a flat commission: 70 percent to the developer, 30 percent to Apple. Android Market (now Google Play) was introduced two months later, with the same cut: 70/30. Windows Store was four years late to the party, so Microsoft decided to set bait. Developers started with a 70/30 cut, but then were upgraded to an 80/20 cut after they had reached $25,000 in sales.

In eight years, Apple experimented with dubious design choices, the Microsoft board decided that Ballmer should stop dancing, but app store pricing didn’t change. Yes, Apple introduced an 85/15 cut, but only for subscriptions, and only after the first year. On the other side, Microsoft ditched its initial discount in 2015 and went with the standard 70/30. Which begs the question:

Is 70/30 some magic ratio or just an arbitrary convention?

Let’s examine that. From a developer’s perspective, the app stores provide the following benefits:

Reasons to use app stores are quite compelling, and all platforms are moving in that direction.

But, the value of listed benefits changes significantly with the perceived user value of the app. This dynamic is not intuitive, so let’s use two imaginary developers as an example:

These developers’ views on the above app store benefits are quite different:

Two app developers, two very different stories. While FlappyElephant’s developers would pay even 50 percent, AcmeShop’s developers consider everything above 10 percent to be a ripoff.

There is a way to satisfy both parties: progressive pricing. The commission should fall as the price of the app increases, which can be implemented in many ways.

For example, this funky-looking formula:

Price can be either actual transaction price, or, arguably more fair, cumulative user spend per app. In the case of latter, after user purchases 10 times a $10 monthly subscription, cumulative user spend is $100 and the developer is given a 10% commission. Again, this is just one of progressive pricing options.

I think that makes perfect sense. I purchase many $1 apps impulsively, thanks to the app stores. But I never purchase anything above $20 without going to the Internet and researching all the alternative options. I buy an expensive app because I trust the developer, and then the app store just makes it more expensive. Not just 30 percent. App stores make it 42 percent more expensive (30/70=42.8%).

Of course, big developers like AcmeShop are not stupid. They have found a way to have their cake and eat it too. The solution is simple:

One by one, big developers have started implementing exactly that strategy. 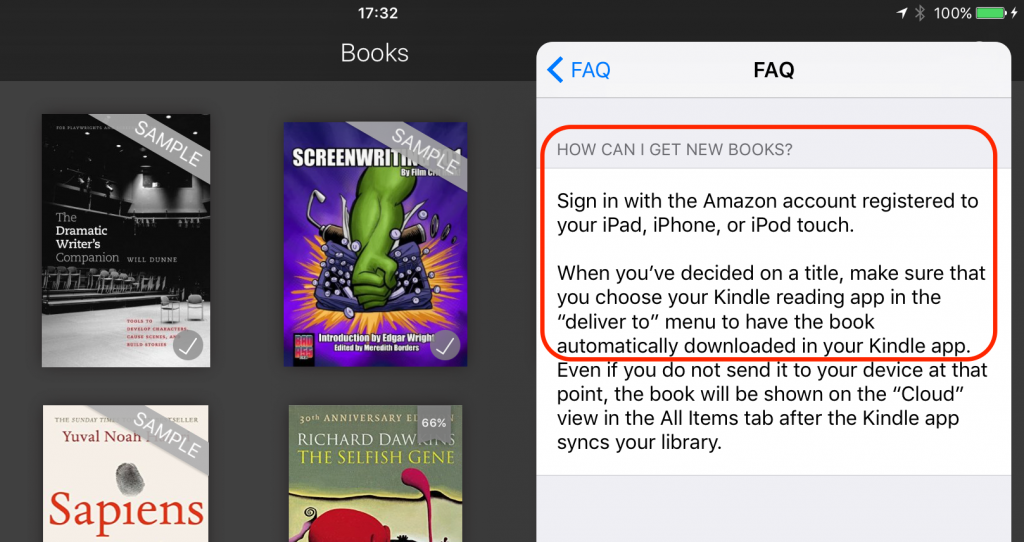 Kindle’s Android app is even more blunt; it circumvents Play Store with a built-in browser (!): 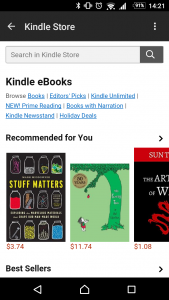 Spotify has a slightly different system. It offers in-app purchases, but they are more expensive than purchasing a subscription on their website. Spotify even sends an email to users warning that they made a stupid decision: 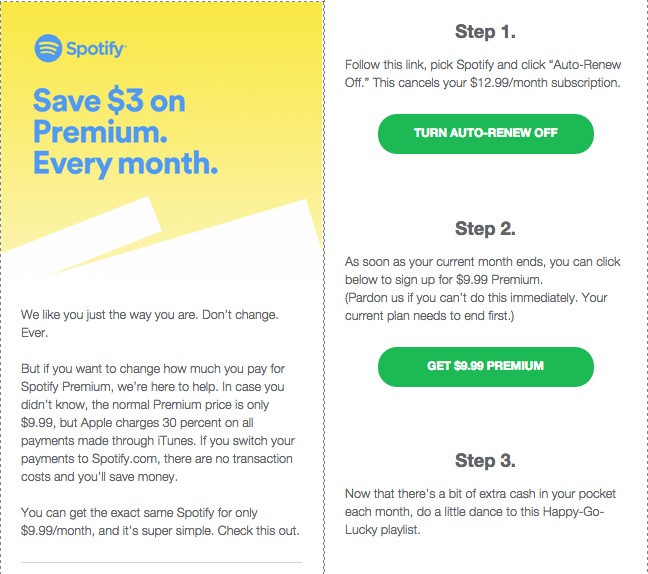 Practically every music subscription service has been circumventing app store payments since 2011.

So, congratulations, dear app store product manager. You just shot yourself in the foot. You were greedy for 30 percent and now you are getting zero percent. And users of your app store are annoyed that purchasing something requires switching to a browser. But what can you do? If you kick Kindle, Office, and Spotify off your app store, then nobody will care about your platform. So maybe big developers are right—maybe you should pay them to publish great software on your store? Like when Microsoft was paying selected developers up to $100,000 to port their apps to Windows Phone.

This year, the co-founder of Epic Games wrote a long rant about UWP and Windows 10 Store, asking for Microsoft’s guarantee (among other things) that:

“…users, developers, and publishers will always be free to engage in direct commerce with each other, without Microsoft forcing everyone into its formative in-app commerce monopoly and taking a 30% cut.”

But the Windows 10 Store is good compared to the Mac App Store, which is a joke. It is only useful for downloading Apple apps—in which case Apple pays a commission to itself. Even top-grossing featured apps are leaving, and switching to manual installation. Compare that experience to that of a mobile app store install:

Mounting drives? Dragging and dropping to a system folder? What is this, an 80s Mac with a floppy drive?!

And, in case a Mac app doesn’t have an automatic updater, for every upgrade you have to repeat the exact same procedure.

On Windows, manual installation is a few steps simpler, and you often get a nice malware as a reward for your effort. Like the PCs of my extended family. One of them has so much malware it would be the envy of the Kaspersky Lab researchers.

Why are Mac and Windows still in the Stone Age of app distribution?

Back to the original question. I argue that a 70/30 cut is an arbitrary ratio trying to be one-size-fits-all. It fails at that because the value proposition is completely different for developers of low-price versus high-price products. And app stores fail to profit on high-price apps, because that high price is listed somewhere else.

So, we are now in a triple loss-loss-loss situation:

And it is all because of tech politics.

I will end with that conclusion, as I need to go and mount/unmount some drives.