NOTE: If you are faint-hearted, please don’t follow the links marked with “(disturbing)”.

I know what you are thinking. Zombies, vampires and werewolves are just an entertaining product of human imagination. But not completely. Our mythology is strongly influenced by real-world horror stories. One ancient disease in particular links all of them. Let me give you a few hints.

Here is a young patient tied to a bed: 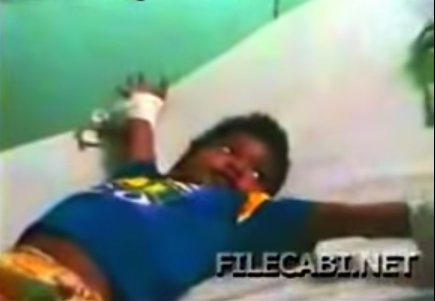 The boy above is a living dead. Even with the best medical care, he is going to die. Once the first symptoms appear, you have a better chance of winning the lottery than surviving.

However, you don’t have to wait for symptoms to see what is coming, because creatures infected by the disease will come after you. The virus infiltrates the brain and changes its host’s behaviour. Headache, numbness and discomfort are the first stage of a personality being stripped. Then, like in a zombie B-flick, patients will become aggressive and violent. Deprived of all fear, some will attack healthy individuals, spreading the disease around. Even recently, in 2009 Angola outbreak, 93 people died in less than three months.

The similarities don’t stop with zombies. Like in vampire mythology, you become one through a single bite. Not necessarily a human bite, most cases in the US are caused by bat bites. Due to hypersensitivity, patients often find garlic and light repulsive. The virus in the brain can cause nocturnal and hypersexual behaviour. Even stranger is the old method of checking if a person has the dreaded disease. If a suspected victim could look at his own reflection, he was not infected. Coincidentally, the legend says that vampires have no reflection.

And let’s not forget about werewolves. Infected humans become wild, furious, animal-like creatures. They lack all fear and produce inhuman screams. And guess what? Wolves are also susceptible to our mysterious disease. Actually, wild dogs are second largest carrier in the US — after bats. Now you can probably guess the disease.

WTF?! Rabies is not scary. HIV and ebola are; rabies couldn’t scare a six year old. There is a reason we think like that and it is connected to one French gentleman. Rabies was THE disease for most of human history—until one lazy summer day in 1885. That day, Louis Pasteur conducted the first trial of a vaccine on a nine-year-old boy who had been bitten by a rabid dog. To everybody’s surprise, the boy recovered. Pasteur was instantly famous. Today, if you have access to basic medical care and get bitten by a suspicious animal, a few injections will solve the problem. We forget that only two centuries ago it was a completely different story. If your child was bitten by a rabies carrier, the best thing to do was to tie him to a bed, listen to his screams for days and days and wait for him to die. Like in this video (disturbing). Thanks to the vaccine, today rabies is no scarier than a broken toe. But rabies has lingered in our culture, in the folklore surrounding zombies, vampires, werewolves and… aliens.

Aliens?! Is it possible for the disease cured two centuries ago to influence new fiction? Seems that it is. Remember the ending of the Signs movie?

Many complained that the defeat of world-conquering aliens by a silly weapon like ordinary tap water was completely unrealistic. But the motif of an evil creature being afraid of a water splash is common: Freddy in Freddy vs. Jason, the Wicked Witch in the Wizard of Oz and others. Where does this ridiculous idea originate from, who used it first? Check this video of a terminal rabies patient:

What is happening there? For the rabies virus to spread, it needs to reprogram the host’s brain. One part of the virus causes biting behaviour. Fortunately, that one isn’t very effective in human hosts, and human-to-human transmission is rare. Other parts of the virus disable the swallowing reflex. That is because rabies is transmitted by saliva. The act of swallowing is not good from the virus’s perspective, as it gets rid of saliva. And virus RNA that produces that behaviour works extra well in humans. Just showing a glass of liquid causes choking spasms, and that painful experience causes hydrophobia (“fear of water”).

No matter how fascinating rabies is, society prefers fiction over truth. Vampire sagas and zombie flicks attract millions of viewers, while the above video of a child patient is downvoted on YouTube. We will buy a movie ticket to witness the stylized manslaughter of hundreds, but actual footage of one person in a bed is too disturbing for refined viewership. The Western world has forgotten about the disease. The best online rabies documentary comes from Philippines. But those who forget the past are doomed to repeat its mistakes in the future. In our case, it is the growing anti-vaccination sentiment or the fact that people bitten by rabid bats fail to visit a doctor.

I don’t know about you, but I find real life much more interesting than fiction. If you agree, spread the word via sharing buttons below.