Private enterprises are sometimes really efficient. They have an army of business heads sticking out of Windsor neckties and thinking about the best way to run everything. But sometimes this leads to results that might surprise laymen like me: 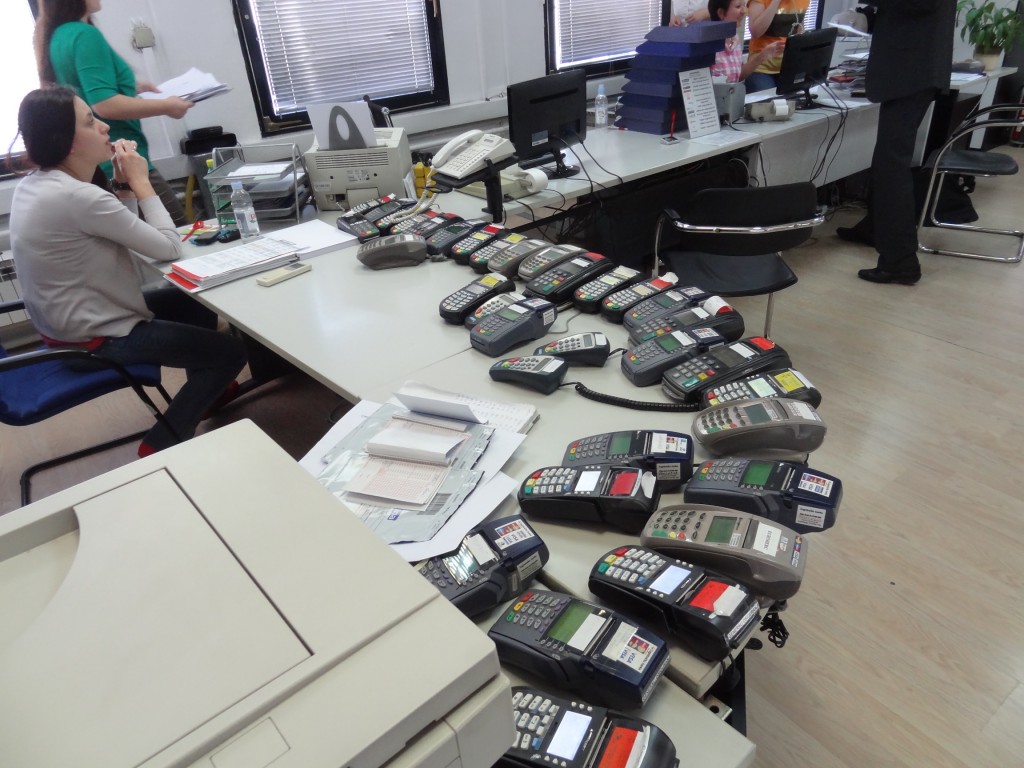 Don’t worry, I counted them for you. It’s 34 little POS machines. Feeling curious? So was I when I came to a local Croatian auto insurance branch. I wanted to buy a insurance with the marvel of the 21st century—the plastic card.

“Do you have a debit or credit card?” the lady asked.

“Which card company?” was the second question.

“Which bank issued the card?” the insurance lady was persistent.

“Yes,” she replied, “every bank and every credit card company sends us different ones. I will use the Raiffeisen Bank POS with the MasterCard debit logo, so we don’t get overcharged for processing.”

Holy s#*t! I knew that somewhere smart card inventors were turning in their graves. The whole reason for having a smart card standard is to provide a generic means of payment. Meaning you can use any card at any vendor. All cards have the same shit inside, and all POS machines promise to treat that shit equally, as defined in ISO/IEC 7816. But the tech utopia—one POS to rule them all—failed at some point.

The reason is business politics. Any POS can still process any card, but the software charges a higher commission for “evil” cards. Evil cards are, of course, all cards not issued by the institution owning the POS device. Let’s call that POS racism. Now, you can probably see that POS racism is bad for shops (increases cost and complexity) and for consumers (price of inefficiency in the end translates into a higher cost of goods). But is it good for the banks and credit card companies who charge the commission? I argue that POS racism is also bad for them. Because none of them owes the majority of customers, there are more cases in which your cardholder buys something at a shop that already has another company’s POS than cases in which your cardholder buys at a shop that has your POS. In addition, the idea that transaction processing in the internal network is free is wrong—the internal infrastructure also has a significant cost. Since banks and credit card companies sell exactly the same thing (bought from third parties), they don’t have a competitive advantage. They could lower their transaction costs if they would just outsource to the infrastructure provider, who could then maintain only one POS per shop. In this case it would be 34 times cheaper.

What is the reason behind this irrational behaviour? It’s easy to pick on business heads. Tight windsor neckties deprive them of oxygen, hahaha. But I think more general rule is in action. Daniel Kahneman gave an example of a Harvard economics professor who was a vine collector. He would only buy bottles priced below $35. But as soon as he owned a bottle, he wouldn’t sell it for a less than $100. The act of owning something makes it psychologically more valuable, which is called the endowment effect. Or as George Carlin said, their stuff is shit and your shit is stuff. In the POS case, you perceive your own network as more valuable than competitor’s network. You charge competitors for using your great network, but you don’t want to pay the same fee for using their shitty network.

The Russians like it hard-core, here are 13 ATMs in Omsk. Each one with a separate servicing company, a separate filing schedule, and separate mechanical failures. You don’t need to think of efficiency when you can charge large credit card fees.

One would think that the United States, as an old capitalist country, would not suffer from the examples like this. Highly competitive markets should punish inefficient companies. But the most interesting example comes from just around the corner from Wall Street. Did you know that at the beginning of 20th century there were three independent subway companies in New York? They were called IRT, BMT and IND (click image for larger version):

They not only directly competed for passengers on some routes, but also had incompatibile systems. BMT/IND trains couldn’t fit into an IRT tunnel, because they were wider and longer. IRT trains could fit into a BMT/IND tunnel, but since they were narrower, the distance from the train to the platform was unsafe. As with the POS and ATM examples, customers were charged fees when switching from one company to another. New York City realized that this situation wasn’t good and in June of 1940 bought BMT and IRT (IND was already owned by the city). They started the unification project which included closing more than five redundant lines, as well as overhaul of IRT trains, and introducing free transfer points. Here is the picture of IRT Second Avenue Line, being demolished shortly after the unification: 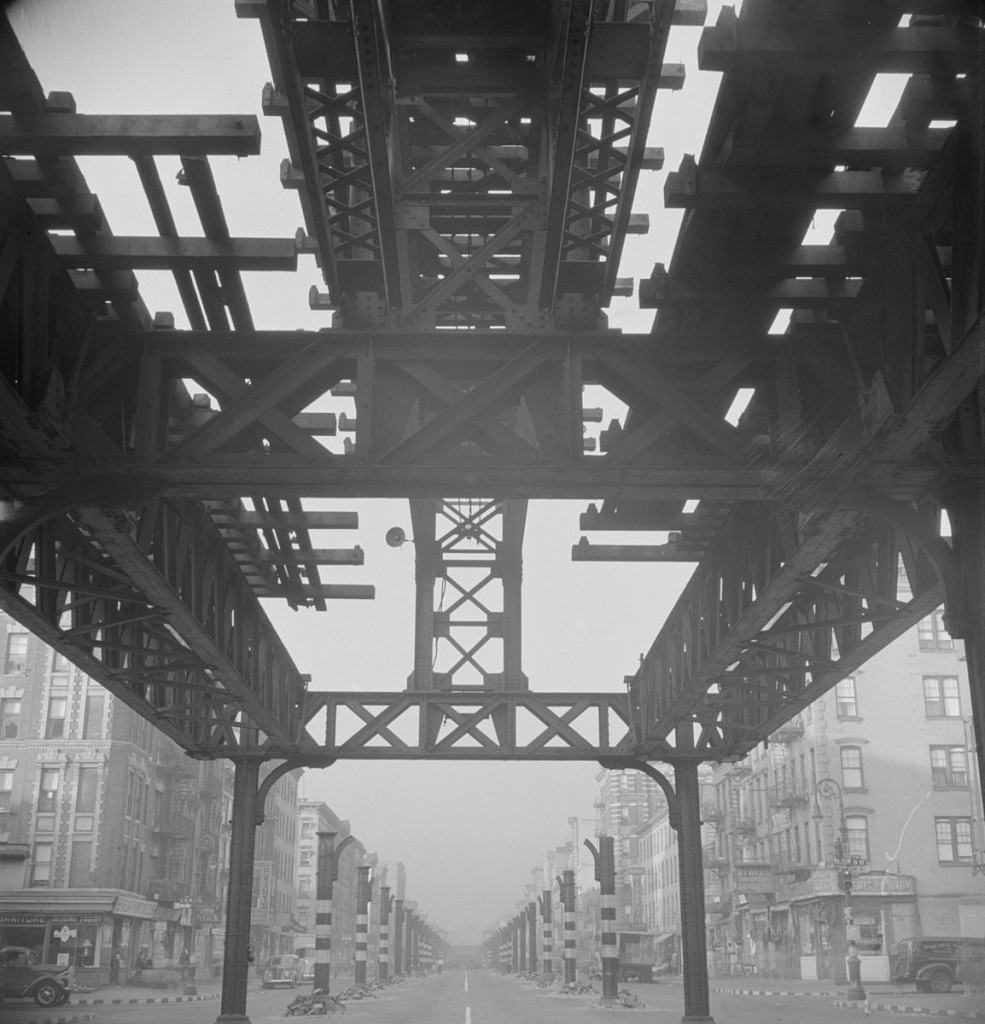 In this case market failed to reach the optimal point and the local government stepped in an attempt to make it better.

Don’t get me wrong, I believe that capitalism works better than communism (I lived in both). After all, I have two companies. But I also believe in the following advice:

Do what you do best and outsource the rest.

What bothers me with above examples is that companies start putting large efforts in activities that don’t add value to customers. Making trains incompatible doesn’t improve a daily commute. Having 34 POS machines makes process of charging slower. But both add a significant infrastructure cost.

As I was giving my credit card to the lady in the insurance office, I was shaking my head. In the end my money pays for craziness of this system, and I don’t like it. If you feel the same, share the article.

UPDATE: I have edited the last bit to clarify my opinion, as many people on Hacker News presumed I am advocating against capitalism. Again, I am not.